Ten Points for a Trade Union Strategy Against Climate Change | The Bullet No. 1039

The climate struggle is about democratization of the economy and society, redistribution of wealth, the free use of our common knowledge 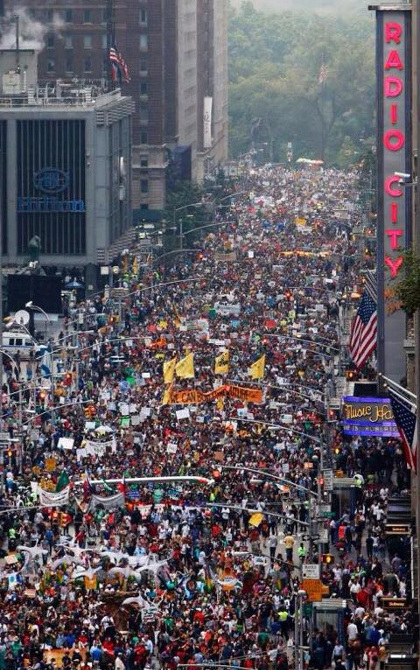 Ten Points for a Trade Union Strategy Against Climate Change | The Bullet No. 1039.

More on the People’s Climate March

Here are a few links to article you might want to take a look at concerning the People’s Climate March that was held yesterday, September 21.

The big question after an event like this is: What happens next? Will this march be a catalyst for change, and if so, what change should we hope for? Are there flaws in the strategy?

So have a look at what others who are asking these questions are saying:

So we have a corporate-designed protest march to support a corporate-dominated world body to implement a corporate policy to counter climate change caused by the corporations of the world, which are located just a few miles away but which will never feel the wrath of the People’s Climate March.
Rather than moaning on the sidelines and venting on Facebook, radicals need to be in the streets. Join the marches and more important the direct actions. Radicals need to ask the difficult questions as to why for the second time in fifteen years has a militant uprising, first Seattle and then Occupy, given way to liberal cooptation. What good is your radical analysis if the NGO sector and Democratic Party fronts kept out-organizing you?

The oligarchs do not bankroll such a mobilization (via millions of dollars funnelled through foundations) without reason.
There is an agenda. The information that follows makes the agenda very clear and the only thing green about it is the colour of money. The term “green”, in reference to environment is, officially dead.

[on the strategy of “deliberative polling”]

Here is a cheat sheet on how to argue with climate deniers.

Here is a piece from the Wall Street Journal that raises some important (arguable) points. Consider the source (as in every claim in this discussion) but consider the questions, too.

(I may update this post as I find more articles of interest.)